For Gudanji people, only a select few are story tellers. It’s a testament to our front cover artist Ryhia Dank, that someone so young has become one of those storytellers, depicting the neutral, natural tones of her traditional land, Garranjini, together with the bright colours that surround her here on the Sunshine Coast.

John Caruso talked to Ryhia for our Everyone Has A Story podcast series.

“I only started painting March last year,” twenty-nine-year-old Ryhia Dank says. “I was in Darwin with not a lot to do and one of my friends encouraged me to paint something for him. He said, ‘do whatever you want to do’ so I did a small 50cm X 50cm piece which took me three days to complete.

“This is a long time compared to now; these days I complete a 2m x 90cm piece in three days,” explains Ryhia.

Off the back of that initial request, more and more friends asked for paintings however Ryhia’s culture only allows certain members within her family to be ‘storytellers’.

“I showed my Mimi, ‘grandmother’, and asked if it was ok for me to create these paintings and once she saw those early pieces she was totally supportive and suggested I sell them,” she said.

“With Gudanji people there are many different roles, such as hunters and gatherers, and only a few can paint and tell stories because not everyone knows the background of our people. You have to earn respect and gain the knowledge before you can share the stories.”

Growing up on a cattle station near the Gulf of Carpentaria in a caravan with no electricity or hot water conjures up images of a spartan existence. A place where if you were hungry and wanted food, you had to hunt for it.

“It didn’t bother me,” said Ryhia.
“I thought it was cool. We lived near my family’s traditional land, Garranjini, with these beautiful rock formations, waterfalls, lakes and lots of fish. My mum would say, ‘if you’re hungry then go find food’ and often she’d suggest that I didn’t have much of a childhood, however I disagree,” Ryhia says.

It’s been a five-and-two life for Ryhia’s family because of her father’s work: five years in the bush near the gulf, and then two years on the Sunshine Coast, living in Buderim. “The colours here are so bright and contemporary and the work I do when I’m back on Gurrinjiny land is more traditional,” she explains.

“I call my storying: nardurna. The three lines in my brand are to acknowledge the three woman who came from the ocean near Ngukurr in the Gulf of Carpentaria,” she says. “They travelled a long way and then created the place of my family, the hills and freshwater Country.”

For someone who only started painting last year, Ryhia has commissions booked almost to the end of 2021.

“It’s an awesome free marketing tool,” she said. “Potential customers message me on there and then I direct them to my website where I get more details about the kind of piece they want,” she says.

The idea that Ryhia can make a living from her creations is still sinking in. How does that saying go? ‘When you do something that you love as a job, you’ll never work a day in your life’.

“I pinch myself and think this is all so surreal,” she says. “I don’t set an alarm. My body clock wakes me between five and five thirty each morning and from six I’m painting, often through until eight at night.

“I feel like my brain is going constantly and sometimes if I have an idea, even at one in the morning, I’ll get out of bed and get that idea down on paper or canvas. With the creative space in my home, I’ve got a mixture of artwork around me from indigenous art to Andy Warhol style pop-art and I draw a lot of inspiration from the natural beauty that surrounds me here in Buderim,” Ryhia says.

Working on a commissioned piece means exploring a few details.

“Often there’s a theme, family or travel for example, and then I work off a colour scheme that they prefer. The piece has got to look comfortable in their space, it can’t be jarring or stand out,” she says.

The best part about talking to Ryhia for the Everyone Has A Story podcast is that she smiles a lot, and sometimes laughs whenever she refers to herself as an ‘artist’, simply because she can’t believe the position she finds herself in: running a business and making a living from her creations.

“I feel like I have to go back to some sort of real job next week. I was working in a corporate marketing world and it’s difficult to adjust to what I’m doing now,” she explains.

We’re sure the future will continue to be bright for this storytelling artist. 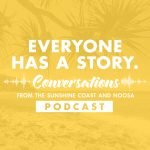 Want more? Listen to our podcast “Everyone has a story: Conversations from the Sunshine Coast and Noosa” with Ryhia Dank. Making the most of Chances