Local photographer Megan Gill’s inspiration for her latest exhibition, Portraits of Mankind, was the suicide death of a 36-year-old man she never knew, however his death encouraged her to share the stories of other men in our community who’ve been brave enough to reach out and ask for help. Words by John Caruso.

There’s a great turnout at the launch for Megan Gill’s Portraits of Mankind exhibition in conjunction with The Alliance for Suicide Prevention – a Sunshine Coast community-based program offered by USC’s Thompson Institute, a world-leading hub for mental health and neuroscience research, education and treatment.

The images are powerful, the settings poignant and the message is clear: Reach out, don’t tough it out!

“I didn’t know Shane Collins; however, I came to know him following his death,” said Megan. “I was printing a photograph of Shane for his memorial and looking into his eyes I couldn’t understand what was so bad that couldn’t be fixed.

“I wished at that moment that he could have seen himself through my eyes and through my lens,” recalls Megan.

The first session for Portraits of Mankind was set up in Megan’s studio, however the subject felt nervous.

“Subsequently, I asked each subject that followed where they’d like to be photographed; if there was a place on the coast that was important or significant to them so that’s where we shot most of the others,” she said. “All the photos are black and white, I feel it allows the mind to settle on the photograph and the observer can take in the tone without the distraction of colour.

“The men in my portraits are stand-out citizens who have been through tough challenges, and they’ve become inspirations to others who might be experiencing similar difficulties.”

Professor Jim Lagopoulos is the director of the USC Thompson Institute, he’s speaking at the launch and introducing four of Megan’s subjects as the panel of guest speakers who’ll be sharing their life experiences.

“We started a suicide prevention program called The Alliance for Suicide Prevention on the back of an unacceptably high suicide rate here on the Sunshine Coast and it was a good opportunity for us to partner with Portraits of Mankind because it aligned aspects of our program,” he said.

“One of the most important parts of a suicide prevention program is community awareness, informing the community of the issues and offering a solution.

“The exhibition focuses on men and their mental health, and that’s a very problematic area, especially here.”

“What belies these beautiful beaches and hinterland is this undercurrent of mental health issues that we really need to get on top of,” Professor Lagopoulos said. “We have some of the best health hubs I’ve ever seen, not only in Australia but some of the best in the world, however we’ve got this specter, this dark cloud hanging over us and we really need to start making inroads into it.”

The USC Thompson Institute is building a post-traumatic stress wellness centre, the first of its kind in Australia and one of only a few around the world.

“It’s an integrated centre of not only research but a centre that will offer clinical care as well,” Professor Lagopoulos said. “One of the research platforms is a genomics facility that allows us to look at specific gene changes and whether gene therapy can help. We’ve also got a youth mental health program and one of the things we’re working on is a world first to uncover what a normal neuro-developmental trajectory looks like in adolescence because between the ages of 12 and 18, the brain changes the most and that’s when we see high incidents of mental illness emerging – 20% in fact.”

“We’ve got to be able to predict it earlier and that’s difficult because the young brain is changing so quickly that we can’t identify what changes are normal and what underpins a mental illness,” Professor Lagopoulos said.

“This program, the first ever in the world, aims to map out a normal neurodevelopmental trajectory and if we can understand what that looks like, we can use that as a template and see when young people start to deviate from that pathway. If we can diagnose them earlier and more accurately then the treatment outcomes will be much better.”

The Alliance for Suicide Prevention has 125 organisations involved with its suicide prevention training framework which is based on the only evidence-based prevention program to date, the European Alliance Against Depression.

Portraits of Mankind aims to inspires men to seek help by sharing the stories of men who have overcome challenges and rebuilt their lives – that it isn’t weak to reach out if you’re struggling.

Reach Out, Don’t tough it out!

The exhibition can be seen online or at the following venues:

Experiencing his own feelings of disconnection at an early age, Jandamarra’s childhood was shaped by bullying, racism and collisions with the law. Eventually discovering his weapon of choice was a paint brush, Jandamarra’s emotive artwork is bridging the gap between his indigenous culture and modern Australia. His paintings connect with many, including through his entries to the Archibald Prize.

Trent took the brave step of leaving the security of a well-paid job in construction to follow his soul’s yearning. Trent has recreated himself as a healer within his community through his business “High on Chi”. He has supported many men through mental health challenges using the modalities of acupuncture, yoga and mindfulness.

A mountain bike accident left Darron Eastwell with a traumatic brain injury. He went from high-flying corporate banker one day to brain injury patient the next. His role as provider and the family dynamic changed forever. Through rehabilitation, therapy and a newfound sense of gratitude, Darron has emerged from the experience as a brain injury survivor and inspiration to others. “The old Darron finished back at the accident. This new Darron is learning to live again.” 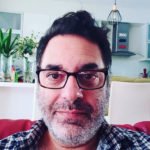